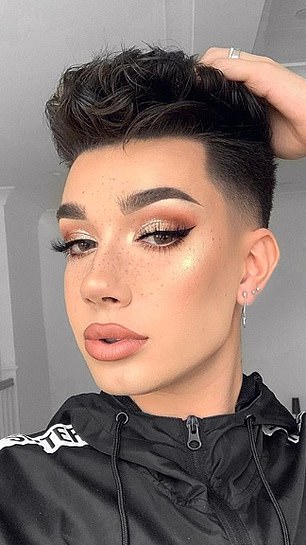 Carmie Sellitto, an English YouTube star known as touchdalight, told DailyMail.com how makeup blogger James Charles tried to seduce him with flirty texts and had him question his sexuality.

Heterosexual Sellitto, 20, of London, who is in a relationship with British YouTuber Kate Elisabeth, 19, said: ‘James kept telling me how I was the hottest guy he ever laid his eyes on.’

Sellitto met Charles at VidCon, a four-day event in July last year in Anaheim, California, 25 miles from Los Angeles, for YouTubers and other social media influencers.

He described how Charles questioned Sellitto’s sexuality when Sellitto told him he wasn’t gay.

Sellitto told DailyMail.com: ‘James made me question myself. He asked me, ‘Are you sure you aren’t gay or bi? Are you sure?’

Sellitto said: ‘I was at VidCon in the LA area last summer and I went to an after party attended by some huge YouTube stars.

‘I noticed James Charles staring at me from across the room at the party. After a while I went up to him and introduced myself.

‘We started talking, I thought we had a connection. Our conversation lasted for about 30 minutes.

‘Before we left each other he got all of my social media contacts. He hugged me goodbye and told me he was going to be in touch.

‘A few days later he started contacting me via social media. He was flirty but didn’t say anything inappropriate.

‘He kept telling me how I was the hottest guy he ever laid his eyes on.

‘A few days after we met I had to fly back to London.

‘We stayed in contact for the next week or so, then I told him I didn’t want to lead him on.

‘But James made me question myself. He asked me, ‘Are you sure you aren’t gay or bi? Are you sure?

‘I finally had to tell him again that I didn’t want to lead him on. I guess the bottom line is I wasn’t as interested in him as he was in me.’

Sellitto said: ‘After this conversation, James blocked me on Instagram and blocked my number. He still follows me on twitter. I guess he’s forgotten about that.

‘He hasn’t contacted me since.’

Sellitto posted a video on his channel on Tuesday confirming he met Charles, who texted him ‘You’re extremely good looking.’

But, until now, Sellitto had not explained what happened.

Charles has lost 3.13 million subscribers on YouTube since fellow vlogger Tati Westbrook accused him on May 10 of sexual predatory behavior toward straight men.

Before Westbrook’s post, Charles had 16.57 million subscribers. But as of Wednesday, he was down to 13.44 million, with it still steadily declining.

A solemn-looking Charles, wearing Prada stiletto-heeled boots and Adidas socks, arrived today at Los Angeles International Airport from Australia where he had been promoting his makeup brand. He refused to answer questions from waiting reporters.

She said: ‘He said some things, telling me about a situation that happened in Seattle at my birthday, and it literally made me want to vomit.’

Westbrook added: ‘Oh my god, you tried to trick a straight man into thinking he’s gay. And somehow, you’re the victim.

‘It’s really disgusting to manipulate someone’s sexuality especially when they’re emerging into adulthood and don’t quite have everything figured out.’

Westbrook, 37, who once acted as Charles’s mentor, made the comments after feeling he had betrayed her.

Charles had posted an instagram video on April 22 where he promoted SugarBear vitamins, thanking them for providing him with security at music festival Coachella in Indio, California.

Westbrook owns her own vitamin company called Halo Beauty and came after Charles online for promoting her largest competitor.

Westbrook was referring to Charles attempting to seduce waiter Sam Cooke, then 19, at John Howie Steak restaurant in Seattle, Washington, where Westbrook had her birthday party on February 14, 2019.

Cooke posted his own video confirming the allegations and described being ‘bi-curious’. He said he met Charles, who kissed him in Charles’s hotel room, but the pair stopped at that.

In the video, Cooke said he sent messages to Charles days later, telling him he did not consider himself gay and would be happy to just remain friends.

Cooke posted screenshots of messages from Charles which said, ‘You’re not straight no matter how many times you tell yourself.’

Until now, Charles has seen incredible success. His YouTube channel has received a total of 1.7 billion views and he became the first male ambassador for CoverGirl makeup in 2016.

On Tuesday, male model Jay Alvarrez, 23 –  best known for dating model Alexis Ren before a very public breakup in 2016 – revealed he received flirtatious messages from Charles in February despite describing himself as ‘straight as could be’.

On his Instagram Stories, Alvarrez shared a screengrab of the conversation he had with the beauty guru, while captioning the image, ‘People giving this kid [too] much props he got no game.’

Jay Alvarrez revealed on Tuesday that he received a message from 19-year-old Charles, who told him he was ‘hot’ – despite him being very publicly heterosexual

Charles messaged the model first by saying, ‘Hi daddy’. The conversation then continued with Jay complimenting Charles’ makeup skills before asking why he was sending him direct messages.

Revealed: Model Jay Alvarrez (left) shared on Tuesday how YouTuber James Charles slid into his Instagram DM’s in February despite him being heterosexual

‘lmao you’re hot,’ the YouTuber responded to the message.

It was at this point that Jay made clear to Charles  he was not interested, despite the YouTuber’s compliments.

‘Appreciate that my guy I’m as straight as could be,’ the model responded.

Alvarrez had never publicly indicated he would be interested in a same-sex romance and his only public relationship was with a woman.

Like Sellitto, Alvarrez is part of a growing number of straight men who have accused Charles of hitting on them even though they were heterosexual.

Those accusations were only brought to light following the accusations in the 43 minute-long YouTube post made by Westbrook, who had been close friends with Charles for two years.

‘I’m cackling cause he hit up my boyfriend in the dms several times knowing damn well he’s straight,’ she wrote.

Later, she amended the comment: ‘I feel like deleting this cause I checked and it wasn’t several times, only one dm and some comments under pictures.’

Detailed accounts of when Charles was overly sexual to men were mentioned in Westbrook’s video, including one account of when the YouTuber attended her birthday dinner earlier this year.

She said: ‘You are using your fame, your power, your money to play with people’s emotions,’ she said. ‘You’re threatening to ruin them, you’re threatening to embarrass them, and you’re doing that to have them behave sexually in your favor, even if they’re straight.

‘Cracking someone’s sexuality is a not an escape room,’ she said.

The exodus of subscribers from Charles’s YouTube channel occurred despite Charles posting an apology video to Westbrook just hours after her YouTube video.

Charles’s video, which has been watched 44 million times, has received 2.8 million dislikes on his YouTube page.

In contrast, Westbrook has seen her popularity grow since releasing her video against Charles.

Dumping it out: Another tossed her palette her cat’s littler box

Drama queens: Some former fans are destroying their James Charles palettes following his public controversy, with at least one burning the makeup in the trash

Some angry former fans of Charles had expressed their rage by posting videos of themselves damaging their James Charles eye shadow palettes.